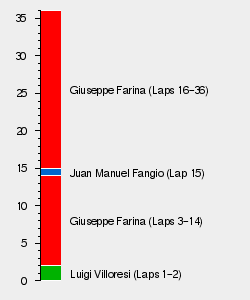 The 1951 Belgian Grand Prix was the third race of the 1951 Formula One Season, set to take place at the Circuit de Spa-Francorchamps, Francorchamps, Liège, Belgium over the weekend of June 15, 1951.

This race was won by Nino Farina of Ferrari, allowing him to take first place in the World Drivers' Championship from Juan Manuel Fangio. This would also be André Pilette's first Formula One Grand Prix.

Despite the talk that Ferrari were going to unseat Alfa Romeo at the top, the Italian lead manufacturer demonstrated that it had lost none of its speed in Switzerland. Juan Manuel Fangio dominated the event, the team also ensured all four of its entered cars scored points at the Bremgarten event.

The entry list for the Belgian Grand Prix was much smaller, the Castleton Trophy Libre support race for the Isle of Man TT had claimed the interest of most of the British contingent on the field. As well as this the Maserati privateers would also be absent from the race. Enrico Platé had planned to enter the lone car of José Froilan González, regular drivers De Graffenried and Schell being unavailable. However, the team failed to arrive for the event and thus the race was absent of the Maserati drivers. Prince Bira had once again planned to enter the Maserati-OSCA hybrid, however the team withdrew the car.

Ferrari had been quick in Switzerland, however they had not closed the gap to Alfa Romeo as much as they hoped. Their fortunes hoped to change with Ascari returning to full fitness after injuries at a Formula Two event in Genoa had hampered his performance at Bremgarten. Piero Taruffi, who had acquainted himself well with Ferrari with a second place at Bremgarten and Luigi Villoresi remained partnered with him in the team. The man designated to lead the eventual BRM charge, Reg Parnell had been entered a private Ferrari 375 by major BRM financial backer, Tony Vandervell. Parnell however withdrew his entry, preferring to compete in the Castelton Trophy at the Isle of Man. Parnell would go on to win the event.

The remainder of the entries were made up of Talbot-Lago T26's. Louis Chiron who had driven one race for Enrico Platé in Switzerland had decided to join Louis Rosier's privateer Ecurie Rosier for the remainder of the season. Chiron would race Talbot-Lago's alongside his team mate and manager, Louis Rosier. Rosier, another privateer Étancelin and Johnny Claes, participating at his home grand prix would run the DA model of the T26, the more recent and powerful version of the car.

In standard T26's all entering as privateers were Yves Giraud-Cabantous, Pierre Levegh and André Pilette. André Pilette starting his first Formula One race at his home grand prix. Pilette was a driver of strong racing heritage, his father Théodore Pilette had been a pre-World War One grand prix driver.

The battle for pole position as expected was fought between the Alfa Romeo's and Ferrari's. Fangio once again held the measure on the field in qualifying, his pole time being a full three seconds faster than teammate Farina's second fastest time. Ferrari had continued to close the gap to Alfa Romeo, Villoresi who sat the third fastest time was only a second off Farina's best time. Ascari was in fourth a further second down on Villoresi ahead of the final Ferrari of Taruffi. Sanesi had a dismal qualifying in his Alfa Romeo, he was eleven seconds slower than Fangio and sat behind all three Ferrari's sixth on the grid.

The remainder of the field made up of the Talbot-Lago entries who were considerably slower. Rosier was the fastest Talbot-Lago in seventh, however he was 20 seconds slower than Fangio's pole time. Cabantous was next ahead of Chiron, Étancelin, Claes, Pilette and Levegh.

The drivers were greeted with fair weather for the grand prix at Spa-Francorchamps. This was in direct contrast to the conditions the drivers had raced in at Bremgarten. At the start, the two Alfa Romeo's of Fangio and Farina were bogged down at the start allowing the Ferrari of Villoresi to snatch the lead of the race. Fangio's start had been terrible, he dropped to fifth place behind Villoresi, Farina, Ascari and Sanesi. Étancelin had failed to make it off the start-line, his Talbot-Lago failing with transmission problems.

Villoresi clung onto the lead, however it was clear that Farina's Alfa Romeo was quicker. On lap two, Farina overtook Villoresi only for the Ferrari driver to snatch the lead back in the next corner. Fangio was also beginning his recovery, having past Sanesi early on to give flight to the two Ferrari's of Villoresi and Ascari ahead of him. On the third lap, Farina finally made it past Villoresi to take the lead of the race. Villoresi thereafter began to fall back, on the fourth lap his teammate Ascari took second place, a lap after that, Fangio had also moved past Villoresi's Ferrari. The Ferrari's had began to fall away, a lap after passing Villoresi, Fangio had also made his way past Ascari to take second position.

Taruffi had not been matching his Ferrari teammates pace in sixth place and on lap eight he had pulled out of the race with transmission failure. Villoresi was then brought into the pits, a loose oil pipe giving him problems. Sanesi had inherited fourth place, however it would not last. Alfa Romeo would have a disastrous day in pit-stops. Whilst coming in for his first stop, Sanesi's radiator began to overheat forcing him to retire. Farina had been managing to extend a good lead, however when he came into the pits it took him nearly a minute to refuel and change tyres. However worse was to come when second placed Fangio came into the pits. The Argentine had a redesign on his suspension which unfortunately had caused his left-rear wheel to become stuck on its hub. The team spent over three laps, attempting to disassemble the car to get the wheel off and putting a new one on. Fangio remained cool throughout the pitstop, his frustrations appearing to not show through his character. Fangio took to the race track in last place.

The race would yield one final retirement when Chiron broke down with engine problems. Despite his own troubling pit-stop, Farina had been dominating the race. During his second pit-stop he did not even lose the lead to Ascari's Ferrari in second. The Alfa Romeo continued to consolidate its position at the top, the reigning world champion would eventually take the win nearly three minutes ahead of Ascari's second place. Villoresi had also managed to put his Ferrari in third place, however the team left Belgium frustrated, they had been truely dominated by the Alfa Romeo squad at Spa.

Rounding out the final points places were Rosier and Cabantous, the top runners for Talbot-Lago in fourth and fifth. Pilette did well to take a sixth place at his home and first grand prix whilst compatriot Claes was seventh ahead of the final finishers of Levegh and Fangio. Fangio despite once again demonstrating to be the fastest in out-right pace amongst the Alfa Romeo's had been hampered by poor reliability on his car.

Only the top five are displayed