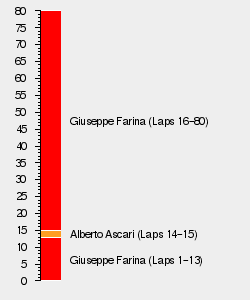 Only six days after the Pau Grand Prix and the Richmond Trophy, the Formula One field reunited for the third non-championship race of the 1950 season. The race marked the return of Alfa Romeo, the dominant Italian outfit had returned to racing with its Alfetta 158 chassis after withdrawing from Formula One, shortly before the beginning of the 1949 season. The team had signed, Giuseppe Farina, a man who had enjoyed much success with the team pre-war and had now risen to become regarded as Grand Prix's most complete driver of the time.

However Farina's infamous aggressive driving style had seen him injure himself once again. Farina was still recuperating from a practice accident at the Marseilles Grand Prix, a Formula Two race held a month earlier in early March. As a result, Alfa Romeo signed the up and coming Argentine talent of Juan Manuel Fangio. Fangio who had been racing for Scuderia Achille Varzi, a team sponsored by the Argentine government had impressed the previous year and had won the season opener at the Pau Grand Prix as well as the previous San Remo event in 1949. The Alfa Romeo outfit therefore would trial Fangio to substitute for the injured Farina.

The works Ferrari and Maserati outfits also attended the event. For Ferrari, its usual line-up of Raymond Sommer, Luigi Villoresi and Alberto Ascari were in attendance. Also in a special drive for the team was the 1939 Grand Prix motorcycle champion, Dorino Serafini. Serafini like Sommer, Villoresi and Ascari would be racing in a 125 chassis. Entering a private 125 was the Briton, Peter Whitehead, whilst entering Formula Two specification Ferrari 166 cars were Roberto Vallone and Giovanni Bracco.

The Maserati's by far made the largest entrants in the race. Eleven drivers had entered the grand prix in Maserati 4CLT/48 cars. Driving for the works Maserati was Louis Chiron and Franco Rol. Other notable teams entering Maserati cars were Scuderia Ambrosiana and Reg Parnell. Parnell having recently won the Richmond Trophy. Parnell was joined by Leslie Brooke who would start his first race with the team. The Enrico Platé Maserati's of Baron Emmanuel de Graffenried and Prince B Bira were also in attendace. The Enrico Platé Maserati's had been the favourite to win the Richmond Trophy and had lost out due to poor fortune by both drivers.

To replace Fangio, Scuderia Achille Varzi signed Alfredo Piàn, another Argentine who had impressed in domestic racing. Piàn partnered the young José Froilán González who had been serving as Fangio's young protege in the team. They too would be driving in Maserati's. Felice Bonetto and his Scuderia Milano were in attendance, racing in a modified 4CLT/48. Whilst Piero Carini and Clemente Biondetti entered in private Maserati 4CLT's.

There was also a small consortium of private Template:Talbot-Lago's in attendance. Pierre Levegh and Eugène Chaboud represented the French in the race. Both drivers racing in Talbot T26C chassis. The Aspiring American driver Harry Schell was also set to enter the race, however was forced to withdraw prior to arriving to the event.

A final manufacturer, SVA-Fiat would make their Formula One debut at San Remo. The SVA, driven by Swiss driver Rudolf Fischer was an upgraded Formula Three chassis which had proven to be fast but unreliable in testing.

The full entry list for the 1950 San Remo Grand Prix is shown below:

After Harry Schell had failed to attend the circuit, the Talbot-Lago attendance had been reduced to two cars before practice began. Then even more disappointingly the remaining Talbot-Lago cars of Pierre Levegh and Eugene Chaboud withdrew their cars from the race before the timed practice began. This therefore meant the field for the race would be made up entirely of Italian constructor's.

Practice was wet, and everyone had expected Alfa Romeo to continue where they had left off in 1948 with a further domination. The team's new driver, Juan Manuel Fangio, however seemed to be struggling in the unfamiliar car topped up with the wet conditions. The Ferrari 125's were providing a challenge to Fangio's Alfetta. Ferrari's young charger of Alberto Ascari took a surprise pole in the race ahead of Fangio in the Alfa Romeo. Questions began to arise about whether Alfa Romeo would remain dominant or whether Fangio could live up to his reputation in a top team.

Behind Ascari and Fangio came the other 125's of Villoresi and Sommer. The fourth works Ferrari entry of Dorino Serafini had struggled in the conditions and was on the back row of the grid. Serafini being ahead of only Rudolf Fischer's SVA which had broken down before he could set a fast lap.

José Froilán González set the fastest time for the Maserati cars. The young Argentine taking the initiative in the Achille Varzi team following the loss of its leader in Fangio. Following González was Felice Bonetto in the Milano-Maserati and Fangio's replacement Alfredo Pián.

The Formula Two Ferrari's of Roberto Vallone and Giovanni Bracco were the next on the grid ahead of Piero Carini's Maserati. The works Maserati outfit were left looking sheepish after the qualifying after being bested by most of the privateers and non-works teams. Louis Chiron could only manage eleventh whilst Franco Rol was in twelfth. Clemente Biondetti started from thirteenth whilst the stars in the Richmond Trophy appeared to be struggling as they ran in the back of the grid.

Leslie Brooke did well on his debut for Scuderia Ambrosiana did well to outqualify teammate Reg Parnell, Brooke managing fourteenth whilst Parnell languished in seventeenth. Splitting the Ambrosiana cars was Prince Bira and Peter Whitehead. Whitehead struggling to make use of his Ferrari 125. Baron de Graffenried was left a frustrated nineteenth ahead of only Serafini and Fischer.

Ahead of the start of the grand prix, the track was belittled with a light but constant rain that was set to last throughout the duration of the race. The main question of the race would be whether Ferrari could defeat the lone Alfa Romeo 158, the car that had dominated grand prix racing for the last decade. The team's stand in for driver Giuseppe Farina, Juan Manuel Fangio had not seemed to be comfortable with the car during practice and Alberto Ascari had taken pole, providing hope that the Alfetta's could be beaten.

Moving off the line, it was a poor start for Fangio in the Alfa Romeo where he dropped back to fifth as the Ferrari's of Ascari and Luigi Villoresi sprung into the lead. The opening lap eliminated two cars. Rudolf Fischer retired his SVA on the opening lap, the SVA car in its debut race had suffered a fractured oil pipe. Dorino Serafini, the Ferrari test driver, retired his 125 on the opening lap as well his car having no oil pressure.

The race was running fairly processionally in the wet. After a worrying start Fangio began to come to grips with his Alfa Romeo and moved past former Achille Varzi teammate, Jose Froilan Gonzalez and Ferrari driver Raymond Sommer to take third position. Fangio setting off after Ascari and Villoresi who had opened up a strong lead.

Lap nine proved to be a dramatic lap as five cars retired. Both Scuderia Ambrosiana Maserati's of Reg Parnell and Leslie Brooke retired whilst other private Maserati's of Clemente Biondetti and Felice Bonetto pulled out of the race. Peter Whitehead's privately entered Ferrari was also another retirement.

Fangio, now putting in some blistering laps where he finally began to demonstrate the power of the Alfa Romeo. After overtaking Villoresi, Fangio squeezed past Ascari on lap 13 to take the lead of the race. Meanwhile Prince Bira had retired his Maserati on lap 11 with a broken head gasket. The Maserati's being further depleted from the race. The wet conditions provided further retirements when Piero Carini crashed his private Maserati on lap 25 whilst on lap 28, Giovanni Bracco crashed the Formula Two Ferrari.

Despite losing the lead to Fangio, the Ferrari of Alberto Ascari remained on the heels of Fangio's Alfa. That was until lap 32 when he crashed his Ferrari out when he slid into the tree. Luckily Ascari emerged unscathed from his large shunt, however this meant Fangio now had an unchallenged lead to Villoresi in second place. Villoresi in second place had begun to put in some fast laps, taking the fastest lap of the race at one point. However when it became clear that he was not going to catch Fangio, he opted to conserve his car and hold second position.

During the course of the race, Raymond Sommer, would retire his Ferrari with fuel problems from third on lap 39. Emmanuel de Graffenried who had been running fourth retired on lap 51 whilst chasing the young José Froilán González. The Scuderia Achille Varzi cars proved that they could run well despite the loss of Fangio. González was in third whilst teammate Alfredo Pián was in fourth. Unfortunately for Gonzalez, the young Argentine retired on lap 70 with a broken fuel pipe. This left Pián to take third place on his debut with the team, finishing behind the dominant Fangio and the distant Luigi Villoresi.

Roberto Vallone did well to finish ahead of the two works Maserati's of Franco Rol and Louis Chiron, the works Maserati's had suffered a poor start to the season being outmatched by the other non-works Maserati competitors. The race had only seen six of the twenty starters finish the race as the slippery surface and poor reliability had seen many retirements.

Despite a slow start to the weekend for Fangio and Alfa Romeo which had seen a strong challenge from the Ferrari's, the Alfetta 158 had proven to be just as competitive as it had been since its last race in 1948. Fangio had proved himself worthy in the eyes of the Alfa marque and the Argentine would go from being a temporary replacement for Giuseppe Farina in the race to a works driver ahead of the inaugral Formula One World Championship. Fangio would race against the experienced and reputable Dr Giussepe Farina and Luigi Fagioli in the team.

Despite showing competitive form, it was evident Ferrari still had a bit of work to do ahead of the first round of the championship at Silverstone. Ferrari were quick but at this stage of the season they still seemed to behind their Alfa Romeo rivals.