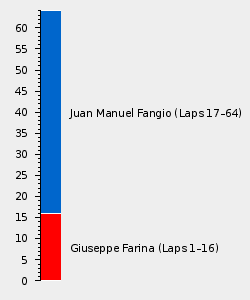 The XI Pau Grand Prix alongside the 1950 Richmond Trophy which was also held on the same day, was the first Formula One race of the 1950 season, albeit both races being non-championship Grand Prix. The race marked Juan Manuel Fangio's last Grand Prix competing for the Maserati team before moving over to the Alfa Romeo team for the remainder of the season. Fangio dominated the weekend, taking pole positon, fastest lap and the race win completing a grand chelem during the race.

Nonetheless, one notable entrant absent from the Pau list from the previous year was Baron Emmanuel de Graffenried. De Graffenried had been the lone driver to remain on the lead lap of eventual race winner, Juan Manuel Fangio whom had total dominance in the 1949 Pau Grand Prix.

Fangio had taken the European GP community by storm during 1949, his performance at Pau one of his earliest demonstrations of his exceptional talent. He had since signed for the returning Alfa Romeo team for 1950, however his entrance into Pau would see him compete one final time for the Argentine team operated by the Automóvil Club Argentino (ACA) to whom had funded his racing break through in Europe.

The team had since renamed itself Scuderia Achille Varzi in tribute to the late Achille Varzi whom had been one of the first European supporters of Argentine's hero, Juan Manuel Fangio. The team, however would not be lost upon Fangio's departure, the ACA were preparing to introduce one of their newest talents, José Froilán González to the European community for the first time. González would make his European racing debut alongside his mentor, Fangio, at the Pau Grand Prix.

Pau was traditionally a track to which Maserati dominated to which a driver in a Maserati entered car had convincingly won all of the races at Pau since the conclusion of the Second World War. However 1950 would see the return of Scuderia Ferrari to the Pau entrants. When the team had served as the Alfa Romeo works team, they had taken victory in the event in 1935 with Tazio Nuvolari.

The team had since become a works constructor and were consistently the most successful team in Formula One throughout 1949. Raymond Sommer, the local favourite would have his best chance yet in taking victory at Pau with his entry with the Ferrari team. Neither Sommer's teammates, Luigi Villoresi or Alberto Ascari had ever raced at Pau and with Ascari competing in the Formula Two car, Sommer was expected to lead the Ferrari offensive in their debut at Pau.

Sommer had been a regular entrant into Pau over the years, however he had never succeeded in taking the victory laurels. His best result had been two consecutive second places in 1936 and 1937. Sommer's second place in 1936 was also incidentally with the Ferrari team to which they had lost the race to the Maserati of Philippe Étancelin.

Étancelin, the only other victor at Pau apart from Fangio had since become a Talbot-Lago privateer. The Talbot-Lago's whilst often having a significant presence at Pau were usually consistently off the pace of the leading cars. The French manufacturer would likely have to take a back seat to the battle between Maserati and Ferrari for the 1950 edition. However, the French audience would get to see a bolstering of presence from their newest Formula One manufacturer, Simca-Gordini to whom Pau veteran, Maurice Trintignant and his teammates, Robert Manzon and André Simon would be racing.

The other Talbot-Lago regulars would include Louis Rosier and Pierre Levegh whilst Georges Grignard would for the second year in succession share his entry at Pau with another driver, this time with Charles Pozzi whom returned to the circuit having missed the 1949 edition.

Louis Chiron had previously competed in Talbot-Lago's in the event, however for 1950 he had switched to the works Maserati team to whom alongside Fangio and González would attempt to defend Maserati's success rate in recent years against the onslaught of the three Ferrari's. Felice Bonetto was also set to appear in a Maserati chassis to which he had created his own personal engine, the Milano.

As the cars arrived for practice, it was found that one of the cars hadn't made it. Felice Bonetto's newly designed Maserati-Milano had broken down in Italy and was unable to make it to the track. Étancelin had made some interesting modifications to his Talbot-Lago ahead of practice to which he had designed an air funnel which directed cool air onto his clutch foot. More peculiar was that Étancelin was seen driving around the track with a box of sliced lemons beside him in the cockpit. Louis Chiron was also carrying a feeding bottle around with him in the cockpit.

During the first day of practice, Sommer immediately began to set the pace in the Ferrari. He underlined the Ferrari's potential when he broke the lap record of the circuit held by Rudolf Caracciola set in 1938 driving a Mercedes. However the next day of practice, Sommer appeared to lose his competitiveness. Villoresi having adapted to the unfamiliar circuit had quickly bettered his time, however it was Fangio in the slower Maserati that would take the pole position.

Behind the leading trio of Fangio, Villoresi and Sommer came Louis Rosier's Talbot-Lago, an impressive result for the privateer. The young José Froilán González was fifth, whilst Ascari whom was described to be "trying very hard" in the F2 Ferrari managed to put the inferior car sixth on the grid.

Louis Chiron was disappointed to manage only seventh after he damaged his car in an accident in the first practice session. Being forced to use the older spare car, Chiron found seventh was the best he could do. The remaining competitors of Manzon, Simon, Levegh, Trintignant, Pozzi and Grignard were off the pace and did not get below the 1:50 mark throughout either session.[1]

The full qualifying results for the 1950 Pau Grand Prix are outlined below:

On lap 15, Fangio moved past Villoresi and Sommer to take the lead of the race. Whilst Villoresi began to fall back, Sommer remained on Fangio's heels and continued to duel with the Maserati, however he never quite could make it passed.

Meanwhile further back, Alberto Ascari in the Formula Two Ferrari retired from the race with a broken rear axle. Ascari remained in the pits, gloves and helmet remaining on, waiting for the chance to take over from Villoresi or Sommer if needed.[1] Shortly afterwards, González was also out of the race. The young Argentine pulled into the pits to retire with a broken differential, an unfortunate result for him which had seen him duel with Rosier's Talbot-Lago for fourth throughout the race. [1]

When the leaders began to encounter traffic from the backmarkers, Sommer slowly began to lose ground on Fangio who was managing to clear the backmarkers much faster than Sommer. One of these backmarkers, Andre Simon, crashed out of the race on lap 32.

However, Fangio began to encounter trouble in his first pit-stop, the mechanics cutting off fuel pressure before Fangio's fuel tank was full led to much confusion among the mechanics. A potential advantage for Sommer was lost when he squandered his own pit-stop. In the stop, Sommer leapt out of the car for a glass of water and a change of goggles. However by the time Sommer returned to his Ferrari, the mechanics had already completed his pit-stop. A panicked Sommer who had lost time by leaving the car hopped back in and in his rush nearly cut off Louis Rosier's Talbot completely in his haste to escape. [1] More misadventure in the pit-stops occured when Louis Chiron crashed into one of his own mechanics whilst coming into the pits.

After all the mayhem in the stops, Villoresi had been of the few leaders to have a completely clean stop which saw the Italian finding himself in second position, now only 3 seconds behind Fangio's Maserati. Sommer in the other Ferrari had seemed to have lost all his earlier pace and fell behind Rosier's Talbot-Lago and was consistently dropping off the pace.

In the lead, Villoresi was able to keep pace with Fangio for a time, however it was not long before the Argentine began to pull away. Fangio took a commanding win, 30 seconds ahead of Villoresi's Ferrari. Behind him came, Louis Rosier, a magnificent drive for the private Talbot-Lago driver. Rosier ensuring the French at least got a podium finish on home turf.

Retrieved from "https://f1.fandom.com/wiki/1950_Pau_Grand_Prix?oldid=80967"
Community content is available under CC-BY-SA unless otherwise noted.