Formula 1 Wiki
Register
Don't have an account?
Sign In
Advertisement
in: Indianapolis 500, 1950 Grands Prix, Formula One races in the United States
English 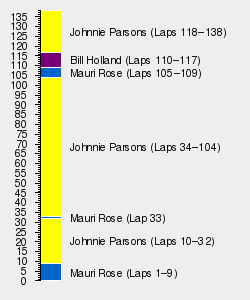 The 1950 Indianapolis 500 was the third race of the inaugural Formula One World Championship in 1950. The race was held on May 30, 1950 at the Indianapolis Motor Speedway. Originally scheduled for 200 laps (500 mi), it was shortened to 138 laps (345 mi) due to rain. The race, which featured an all-American field, was won by Johnnie Parsons, his first and only Formula One World Championship race win.

Qualifying for the 1950 Indianapolis 500 was held over four laps (10 miles) and over four days. Drivers achieved their grid positions based on the day on which the time was posted, then by order of fastest time. If a driver did not go out on the first day, their first run on their first day was considered. As a result, positions 1-11 were decided on the first run, 12-15 on the second, 16-21 on the third and 22-32 on the fourth. The final, 33rd position was decided by a "bumping" procedure: Once a 33rd driver has qualified, non-qualifiers could aim to "bump" the slowest driver in the field by beating their time. At the end of the final day, the driver in 33rd would qualify for the race, but would start at the back despite the possibility that they may have a better time than drivers ahead of them.

Very little video footage exists from the 1950 Indianapolis 500, however the following is one example of this.