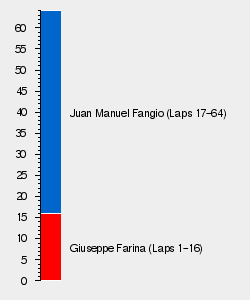 The 1950 French Grand Prix was the sixth race of the season, and was held on July 2 1950. Juan Manuel Fangio dominated the race for his second win of the season.

After his impressive performance in Belgium, Raymond Sommer joined the Talbot-Lago works team replacing the 50 year old Philippe Étancelin who returned to his private Talbot.

Franco Rol was back in action after his Monaco injuries, he was back in the works Maserati alongside Louis Chiron.

Reg Parnell, the former Alfa driver, returned this time at Scuderia Ambrosiana, filling in for David Murray, who was unavailable for the race. He was alongside David Hampshire.

Gordini was back in action, but however with only one driver that being of Robert Manzon.

José Froilán González was back after his injuries in Monaco, remaining at Scuderia Achille Varzi alongside new teammate Gianfranco Comotti.

Peter Whitehead was back racing his privately owned Ferrari, being the only Ferrari to start the race since the works cars were pulled out by Enzo Ferrari, since he believed they were too uncompetitive.

A couple of weeks after the Belgian Grand Prix, the field regrouped once agait the Reims-Gueux street course for the French Grand Prix. Following his win in Belgium, Juan Manuel Fangio had closed to within five points of championship leader, Giuseppe Farina. However Luigi Fagioli still held second place in the championship, the third Alfa Romeo driver had not been as quick as his younger teammates, however the old veteran had maintained better consistency than his two faster teammates and remained second in the standings, despite not taking any wins.

The Ferrari 275 had not had the impression on closing the gap to Alfa Romeo that Ferrari would have liked. Villoresi in the old 125 began to feel the age of the car when he finished two laps adrift of the Alfa's in Belgium. Ascari who had driven the new 275, struggled to find balance in the new car, his disappointing fifth place had all but ruined his chances for the championship. However Ferrari were convinced that once the 275 had outgrown its teething troubles it would be a challenge to the Alfa Romeo superiority. Ascari and Villoresi would both be competing in the new cars with their old 125's on hand as reserves. However there was doubt their new Ferrari V12 engine could compete with the powerful supercharged Alfa Romeo on the long straights that made up the Reims street circuit. Peter Whitehead would once again be back in his private Ferrari 125, the British privateer had failed to start a race this season due to serious engine troubles plaguing him in Monaco and Switzerland.

The French Grand Prix was the home territory of the Talbot-Lago team. The French manufacturer had struggled to compete with the leading Alfa Romeo's and Ferrari's, nonetheless throughout the season its drivers had provided some spirited performances, often being there to pick up a lost podium place when a front runner dropped out of the race. Representing the works squad on home territory were France's best, Yves Giraud-Cabantous, Louis Rosier and Pierre Levegh. The manufacturer also had a set of privateer racers also representing them such as Eugène Chaboud, Charles Pozzi, Johnny Claes and the old veteran, Philippe Étancelin. Perhaps France's best driver, Raymond Sommer would compete once again in minor machinery for his home grand prix after his sudden departure from Ferrari. However his showing with the Talbot-Lago in Belgium, demonstrated Sommer was still capable of fighting among the best.

Aside from the Talbot-Lago's, the little Simca-Gordini outfit were back to compete in Formula One. Their little cars were underpowered and despite being highly successful in Formula Two, their lone entrant of Robert Manzon was not expected to be competitive on the engine reliant Reims-Gueux circuit.

The Maserati teams had chosen not to compete in the Belgian Grand Prix. The works team had been having a dismal year, their drivers Louis Chiron and Franco Rol had no chance in taking the world championship. With this reality, the team had chosen not to take part in Belgium, however the team returned for the prestigious French Grand Prix. Non-works Maserati teams, Enrico Platé and Scuderia Ambrosiana had chosen not to compete in Belgium to race in the British Empire Trophy. Enrico Platé were still absent from the grid, however Ambrosiana had returned with their drivers, Reg Parnell and David Hampshire. The third Maserati team, Scuderia Achille Varzi had also missed Belgium, however they too returned for Reims. José Froilán González was back after missing the last two races following his injuries at the Monaco Grand Prix. For the second seat, the team had chosen Franco Comotti, an Italian pre-war racer who was now in semi-retirement. Felice Bonetto had further modified his Maserati, his Scuderia Milano team had developed an engine known as a Milano to fit into the chassis of Bonetto's Maserati. Bonetto therefore entering a Maserati-Milano hybrid for the first time.

For many of the minor teams and privateers, the French Grand Prix would be regarded as quite a relaxed casual event. Nearly half the grid did not arrive for practice, these drivers being happy to participate in the race under random grid assignment for the lower half of the field. Louis Chiron and Raymond Sommer were the big names to not arrive for practice, they being assigned grid positions 14 and 17. The Ambrosiana Maserati's of Parnell and Hampshire were assigned grid positions 12 and 18 respectively. Chaboud was awarded the highest of the randomised grid spots in eleventh whilst Manzon in the Simca-Gordini was assigned grid thirteen. Claes and Pozzi were fifteenth and sixteenth. Whitehead in the private Ferrari would be awarded last on the grid. Whilst half the grid may have been late to the race, Franco Comotti due to be racing for Scuderia Achille Varzi failed to turn up at all.

As was predicted, the Alfa Romeo's were dominant in qualifying. The long straights meant that the Alfetta 158's powerful supercharged engines were unrivalled. At Ferrari, Ascari and Villoresi were having serious mechanical troubles with the new 275 car. Throughout the practices, the two Ferrari drivers were barely on track. When it became clear the 275 would not be able to be fixed, the dismayed Enzo Ferrari ordered the withdrawal of his two cars. The Maestro knew the old 125's would be no match for the Alfa Romeo's and preferred withdrawing his cars rather than suffer another humiliating defeat to Alfa Romeo. The only Ferrari presence would be the old private entry of the 125 of Peter Whitehead, starting from the back of the grid.

The three Alfa's were therefore left in a world of their own. Fangio dominated qualifying, his best time was two seconds faster than Farina's best in second. Fagioli meanwhile was a further four seconds off Fangio's time. Étancelin was once again topping the Talbot-Lago's in his private car, behind him the works Talbot-Lago entries of Cabantous and Rosier lined up behind him. With the withdrawal of the Ferrari's, the Talbot-Lago cars had a good chance to make an impression on home turf.Franco Rol took eighth place in his Maserati whilst the Achille Varzi entry of González was eighth. Last of the drivers to participate in practice was the Talbot-Lago of Pierre Levegh.

Prior to the beginning of the race, the field lost the Talbot-Lago of Eugène Chaboud. The private Talbot-Lago driver had encountered serious mechanical problems on the grid and was forced to withdraw from his home race prior to the start of the event. The conditions were extremely hot at the French Grand Prix, the attrition rate was expected to be high, the long straights at Reims expecting to be a serious drain on the engines.

As predicted the Alfa Romeo's shot off into the distance, Farina getting the jump on pole sitter Fangio to take the lead of the race . Fangio and Fagioli remained hot on his tails, treating the crowd to what was shaping up to be an epic three way battle for the lead between Farina, Fangio and Fagioli.

Almost immediately after the beginning of the race, the engines of cars began to fail. Sommer was denied an opportunity to shine at home when he pulled his Talbot-Lago out of the race. However failing most terribly on this power circuit were the Maserati cars, their engines rapidly failing. Between lap three and lap ten, all their cars of González, Hampshire, Chiron, Rol and Parnell had retired with engine problems. Only Felice Bonetto in his separately powered Milano engine would still continue of the Maserati runners. However his engine would also blow on lap 15, the Maserati's failing to make it even quarter distance.

The Talbot-Lago's were also struggling, Sommer had already retired whilst Rosier and Claes had retired on laps eleven and twelve. Rosier returned to the pits and called in the car of Charles Pozzi where he subsequently took control of his friend's own Talbot-Lago. The surviving Talbot-Lago's of Levegh, Giraud-Cabantous and Étancelin all had to come into the pits to solve overheating problems. The reliability problems of the Talbot-Lago's and Maserati's had meant Peter Whitehead who had started the race from last on the grid had put his private Ferrari into fourth place by quarter distance. Behind him in fifth doing equally well was the lone Formula Two specification Simca-Gordini of Robert Manzon who had yet to encounter mechanical troubles.

The Alfa Romeo's were seemingly running untroubled until on lap 18 Farina slowed, dropping back behind Fangio and Fagioli before heading for the pits. The Alfa was suffering from fuel starvation, it took Farina's mechanics seven minutes before he could be sent back onto the track. The mechanical troubles encountered amongst the Talbot-Lago's had meant Farina was still able to get on track in fifth place. Only Whitehead and Manzon, the fields minor runners had made it past. With his main rival eliminated, Fangio began to open up a big lead whilst second placed Fagioli was unable to maintain his teammate's pace.

Farina was thereafter driving aggressively to catch Manzon and Whitehead ahead of him. The Alfa driver was putting in some impressive laps and was able to pass Manzon in no time. In catching Whitehead, Farina had set the fastest lap of the race and on lap 35, Farina was back in a podium position when he took third place from the Ferrari. However his fuel feed problem returned and he was forced to return to the pits again, Whitehead reclaiming third place. Farina charged back through the field and on lap 50 had returned back to third, only to retire from the race five laps later.

This meant Fangio took a clear victory ahead of teammate Fagioli 25 seconds adrift. In third came a jubilant Peter Whitehead, Ferrari still having presence on the podium with their non-works car. Manzon had done an excellent job to get fourth, scoring his first world championship points. Following Chaboud's startline failure, Étancelin had stopped midrace to hand his car over to his friend. The duel ran car of Étancelin and Chaboud took fifth place, the final points placing.

For the second race in succession, Fangio had been given an easy run to victory due to mechanical troubles of his rival Farina. With this win and Farina's non-finish, Fangio took the lead of the world championship with 26 points. Farina remained on 22 points, dropping behind the ever consistent Fagioli in the standings who was now second, two points adrift of Fangio. Heading into the final round of the championship at Monza, any of the Alfa Romeo drivers had a chance at the winning the world championship.