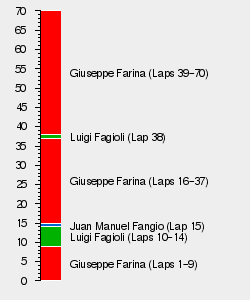 The 1950 British Grand Prix was the inaugural round of the first Formula One World Championship. It was held on 13th May 1950 at the Silverstone Circuit.

The race was won by polesitter Giuseppe Farina, who also set the fastest lap. Alfa Romeo dominated the event, locking out the four-car front row and taking all three podium positions.

The season marked the return of the Alfa Romeo marque, the Italian outfit had dominated grand prix racing up until its withdrawal in 1948. The team returned with its aged but nonetheless highly competitive Alfetta 158. Doctor Giuseppe Farina, the former facing awas selected to lead the team, the former racing apprentice of the great Tazio Nuvolari and a member of the original Scuderia Ferrari squad had returned to the great Alfetta to lead the squad in 1950. The team's second driver was Luigi Fagioli; an Italian Grand Prix racing veteran who was one of the last remaining drivers who raced in the dominant German Silver Arrows cars of the 1930's. At 52, Fagioli was one of the oldest drivers on the grid, however he remained a reliable pair of hands for the powerful Alfa's. Alfa Romeo's third signing was late and somewhat unexpected. After he dominated a non-championship event at San Remo at the beginning of 1950, Alfa Romeo signed Argentina's best racer Juan Manuel Fangio to the team. After dominating in Argentina, the Automobil Club of Argentina sent Fangio to represent them in Europe where he quickly made his mark. As a one-off invitational drive, the fourth Alfa Romeo was piloted by one of Britain's best up and coming talents following the conclusion of the war, Reg Parnell, for his home grand prix.

Alfa Romeo's main rivals, Ferrari were notably absent from the entry list of the British Grand Prix. Enzo Ferrari withdrew his cars from the event, unhappy with the starters money the British were willing to pay the teams. The Ferrari squad instead competed in a Formula Two event at Mons.

The Maseratis made up the majority of entrants into the British Grand Prix. Only Louis Chiron, the grid's most experienced driver who had been on the grand prix scene since the 1920's, was representing the works squad. Scuderia Ambrosiana had hired local drivers, David Hampshire and David Murray, to race their 4CLT/48 chassis. The Enrico Platé team entered the semi-professional royals, Baron Emmanuel de Graffenried of Switzerland and Prince B Bira of Thailand. Felice Bonetto entered a self-modified Maserati, entered as the Maserati 4CL/50 for his Scuderia Milano team. Meanwhile, local driver Joe Fry, a successful hillclimb racer, entered an outdated 4CL chassis.

Talbot-Lago made their return as a works team, with Anthony Lago hiring many of the manufacturer's customer clients to race for the reformed works team. Yves-Giraud Cabantous and Eugene Martin entered updated chassis of their T26C whilst Louis Rosier and Philippe Étancelin raced in the standard chassis. Belgian racer Johnny Claes was the sole driver to enter a Talbot-Lago as a privateer.

The final entries on the grid were made up of the British machinery. Cuth Harrison and Bob Gerard entered old pre-war Type B ERA chassis, while entering the more modern E-Type chassis was Peter Walker and Leslie Johnson who was hired by another British racer, Taso Mathieson to race in his own E-Type car. ERA founder, Raymond Mays, had also entered the event, however he opted to cancel his entry, prior to arrival. Racing the nimble little Alta's were Joe Kelly and Geoffrey Crossley.

A number of cars were denied entry into the British event. Brian Shawe-Taylor had planned to enter a very old B-Type ERA and Tony Rolt planned to enter a Delage. Both cars were deemed unfit for race due to their significant age while George Abecassis attempted to enter his newly created HWM car, however was rejected on account of his car being too new. HWM was another new post-war British manufacturer trying to climb to the top of the sport. The newly designed HWM's had been largely untested against the modern grand prix machinery and much to the disappointment of team owners George Abecassis and John Heath were forced to withdraw their entries.

The full entry list for the 1950 British Grand Prix is shown below:

With the Ferrari's absent, the Alfa's were unchallenged during Thursday practice. Giuseppe Farina took the first ever World Championship pole position, two tenths ahead of teammates Luigi Fagioli and Juan Manuel Fangio, who set nearly identical lap times. The local favourite, Reg Parnell, could only manage fourth, a little off the pace of the Alfa regulars.

Prince Bira was the highest of the Maserati's, beating Cabantous and Martin in the newer Talbot-Lago's. De Graffenried led Rosier and then came Peter Walker in the ERA. Walker, who had previously impressed in his E-Type, was the highest qualifier of the British cars. Louis Chiron was a disappointing eleventh, as his works Maserati was well off the pace. Johnson and Gerard were next in their ERA machinery, whilst Philippe Etancelin was well off in his works Talbot. Cuth Harrison was fifteenth with the Ambrosiana Maserati's of Hampshire and Murray a disappointing sixteenth and eighteenth, who sandwiched Geoffrey Crossley's Alta.

The back of the grid was made up of Kelly's Alta, Fry's Maserati, and the Talbot-Lago of Johnny Claes. Felice Bonetto and his Maserati failed to turn up to the event and so his entry was withdrawn from the weekend.

Note: all timing during the meeting was to 1⁄5 of a second, instead of the more commonplace timing to 1⁄10. This implies that equipment designed for horse racing was used.

The first world championship grand prix was welcomed by a crowd of 200,000 British spectators. The Royal Family was also in attendance to mark this prestigious occasion. King George VI, Queen Elizabeth, and the Earl & Countess of Mountbatten were introduced to the drivers and were given a tour of the circuit by Earl Howe, a successful British pre-war driver who had been instrumental in the design of the Silverstone circuit.

Before the race commenced, Raymond Mays publically unveiled the BRM V16 to the British public. The inaugral BRM car, funded by the British government and based on the design plans of the all-dominant pre-war German Mercedes cars, was the first serious attempt for a British manufacturer to challenge the dominance of the Italians in grand prix racing. Mays announced the V16 would make its racing debut in August at the BRDC International Trophy, before challenging in the world championship for 1951.

The start saw the Alfa Romeo's predictably pull away, their grid order remaining the same. Farina led Fangio, Fagioli and Parnell. Immediately distanced from the leaders, Bira led the midfield with De Graffenried, Martin, Giraud-Cabantous, Rosier and Etancelin following behind.

Behind the Maserati's and Talbot-Lago's, the small British manufacturers trailed behind. The new E-Type ERA's were not fairing well, and as if to prove this fact, Leslie Johnson became the first retirement when his supercharger spectacularly blew up on the second lap. Shortly thereafter, the second ERA of Walker pulled into the pits with gearbox issues. He swapped cars with Tony Rolt to see if he could make an improvement. However, after a few laps the shared car of Walker and Rolt was out of the race. Five laps in, and the fastest British manufacturers were out.

Eugene Martin's Talbot-Lago had been struggling with failing oil pressure since the beginning of the race, and he became the next retirement on lap 10. At the front, the Alfa's continued to dominate the field. The battle for the lead remained tight however, with Farina only being able to hold a very narrow lead over Fangio and Fagioli. Parnell had begun to drop back from the regular Alfa driversm although he maintained a significant gap over Bira in fifth.

Chiron's uncompetitive race for Maserati came to an end on lap 26 when he retired with clutch failure whilst battling the two B-Type ERA's of Bob Gerard and Cuth Harrison for tenth. De Graffenried, another Maserati driver, pulled out of the race on lap 36 with engine failure. Geoffrey Crossley in the little Alta retired on lap 43 with transmission problems; he and fellow Alta racer Joe Kelly had been trundling along at the back of the pack in their underpowered cars.

At the midpoint of the race, most of the cars came into the pits for fuel. The order was left largely unchanged; the Alfa Romeo pit crew impressively getting the cars refuelled in a sub-30 second pit stop. Etancelin lost ninth to the ERA's of Gerard and Harrison when he had to change a spark plug during his stop. Other changes in the pit-stop phase saw Joe Fry swap out of his ERA to allow Brian Shawe-Taylor to finish the race. At the end of the pit-stop phase, Farina continued to lead Fangio and Fagioli whilst a distanced Parnell remained in fourth.

Bira, who had been the only competitive Maserati in the race, lost his fifth position to the Talbot-Lago's of Giraud-Cabantous and Rosier when he encountered engine problems. On lap 49, his car ground to a halt whilst going down the Hangar Straight.

After trailing Farina the whole race, Fangio made his challenge for the lead on lap 60. Exiting the Hangar Straight, Fangio attacked on the entry to Stowe, however his car ran wide and collided with one of the straw bales at the exit of the corner. The move had cost him second place to Fagioli, and then worse still, an oil pipe had been cracked and he was forced to pull into the pits to retire on lap 62.

For the remainder of the race, Fagioli continued to hound the tail of Farina, however he would not find a way past and Farina took the first world championship grand prix victory. Fagioli followed him 2.6 seconds adrift whilst Parnell was on the final step of the podium a further 50 seconds back. It was a perfect start to the season for Alfa Romeo with a 1-2-3 finish. The nearest non-Alfa cars of Giraud-Cabantous and Rosier were fourth and fifth, two laps adrift in their Talbot-Lago's.

Gerard and Harrison finished the race in sixth and seventh, their B-Type ERA's having battled throughout the whole race. Etancelin was disappointed to be eighth following his reliability problems. Rounding out the finishers at the back of the field was David Murray in his outdated Maserati, the shared car of Fry and Shawe-Taylor and Claes's Talbot-Lago. Joe Kelly had also managed to get his Alta to the finish, however clutch problems had seen him 13 laps adrift of the leaders and he was denied classification amongst the finishers.

It had been a dominant start to the season for Alfa Romeo. Farina left Silverstone a happy man with the full array of points, taking victory and the extra point for fastest lap, not to mention the £500 he received in prize money for his race win.