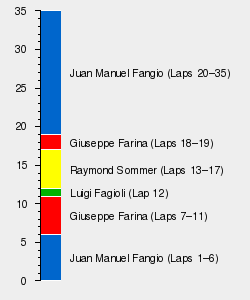 Two weeks after the Swiss round of the championship, the main contenders regrouped at Spa-Francorchamps for the Belgian Grand Prix. Farina had come off the back bone of his second win of the season, allowing him to extend his championship lead with 18 points. Teammate Fagioli was now second in the standings, his relative consistency putting him on 12 points, the elder Alfa driver had still yet to claim his first win. After a non-finish at Bremgarten, Fangio had dropped to third in the championship standings, he had won in Monaco but two non-finishes had hurt his chances. It was a painful loss in Switzerland, after dominating the weekend, Fangio had lost the race with six laps to go when he was forced to retire with engine trouble.

With only three rounds left in the championship, the title looked like it would be awarded to one of the three Alfa Romeo drivers, however the Ferrari cars were still in for a distant shot at the title. Alberto Ascari sat on six points, however a non-finish at Bremgarten had seriously dented his chances. Nonetheless, Ferrari debuted the new non-supercharge Ferrari 275, the successor to the 125 for Belgium. Aurelio Lampredi's first Ferrari design would hopefully be the car prepared to topple the Alfa domination. Ascari closest on points to the Alfa's in the championship was given the opportunity to race the new car at Spa. His teammate, Luigi Villoresi had a dreadful start to the season, he had yet to score a point due to poor reliability despite a series of competitive runs. Notably, Ferrari's third driver, Raymond Sommer, had left the team following the Swiss race. Sommer, famous for his lack of committment to a racing team had returned to his old ways of competing as a privateer. Sommer had regained his independence after two years with Ferrari, he would continue to compete in a private Talbot-Lago T26C, the car albeit was not as fast as the Ferrari's he had been driving.

The Talbot-Lago's would in fact make up the majority of the field in Belgium, the works team would field Yves Giraud-Cabantous and Louis Rosier as usual. Rosier was the one driver on the grid who had previously won the Belgian Grand Prix, taking victory the previous year. Rosier had been the quiet achiever of the season, his six points meant he remained in with a title chance. After Eugene Martin sustained serious injuries following his Bremgarten crash, the team had subsequently called on Philippe Étancelin, previously dropped from the outfit to return as his replacement. The works entry also entered a car for Pierre Levegh who had raced as a private entry in Bremgarten. The final Talbot-Lago entries were the private entries of Johnny Claes and Eugène Chaboud. Chaboud making his championship debut at Belgium.

There was a notable lack of absence of Maserati's in Belgium. The works Maserati team had taken a break from the championship whilst secondary team of Enrico Plate were away competing in the British Empire Trophy, non-championship Formula One race. The only Maserati entry came from, Antonio Branca, racing his heavily outdated 4CL chassis.

Most of the British representation were absent to compete in their local British Empire Trophy event, however the little Alta of Geoffrey Crossley had ventured to Belgium as a lone British competitor. The Alta had previously competed at the opening round of the championship at Silverstone with little success.

Throughout the Friday and Saturday practice, the weather was warm and clear, a surprise from the usual unpredictable weather forecast of the Belgian Ardennes. The new Ferrari 275 being driven by Alberto Ascari was experiencing teething troubles in its installation. To the dismay of Ferrari the car was unable to threaten the dominant Alfa Romeo's, Ascari infact only managing seventh on the grid for the race. Villoresi in the old car was fourth, nearly ten seconds slower than Giuseppe Farina's, 4:37 pole time.

Farina had only beaten his teammate Fangio through the slimmest of margins. Fangio had equalled Farina's pole time of 4:37, however Farina was awarded the pole due to his second fastest lap being faster than Fangio's. Fagioli, Alfa Romeo's old veteran, was still lacking the pace of his younger teammates and was third, four seconds off the pace.

Splitting the two Ferrari's of Villoresi and Ascari were the Talbot-Lago cars of Raymond Sommer and Philippe Étancelin. Sommer's recent departure from Ferrari had not hurt his competitiveness, his desire to return to his privateer ways had not prevented him in matching his old team's pace. The rest of the Talbot-Lago consortium were not on the pace of Sommer. Lining up behind Ascari, were Rosier, Giraud-Cabantous, Levegh and Chaboud who made up the midfield in their Talbot-Lago's.

On the back rows came Geoffrey Crossley, driving the underpowered Alta, Antonio Branca in the old Maserati and Johnny Claes. Claes, the local Belgian driver who was entering one of the private Talbot-Lago's would be forced to start from the back of the grid for his home race due to mechanical troubles keeping him out of practice.

Like in practice, the weather was perfect on race day and the driver's would be lucky to face clear conditions throughout the race. At the start, Farina and Fangio immediately shot away into the distance, Fangio getting the jump on Farina heading into the first corner. Behind them Villoresi had managed to get past Fagioli heading into turn one, there managing to split the Alfa trio. However it was not to last, Fagioli spent a lap behind the Ferrari, however at the start of the second tour, Fagioli was back into third place.

At the front of the field, the spectators were kept captivated by the incredible duel between Fangio and Farina for the lead of the race. Both drivers had distanced the rest of the field, however race leader Fangio was unable to rid Farina who remained right on his tail. On lap 7, Farina retook the lead, however nor he could open up a lead, Fangio now remaining close within his mirrors.

Fagioli in third was a long way off, however he too was able to shrug off the Ferrari of Villoresi. Despite a strong start, the Ferrari driver began to struggle with handling problems and Sommer, his former teammate driving a determined race quickly caught him and past him to take fourth place .

Farina and Fangio both came into the pits for fuel on lap 11 whilst a lap later, the third Alfa of Fagioli was serviced. Sommer was doing an incredible job, infact once the Alfa's came into the pits, Sommer inherited the lead of the race. It was an exciting moment for the first time the Talbot-Lago's were looking competitive and led a world championship race for the first time that season. Sommer intended to run the race without a pit stop, his chances of maintaining the lead were slim but Sommer was pushing hard nonetheless.

Further down the field, Giraud-Cabantous had retired as did Etancelin. Sommer's time in the lead did not last long, both Farina and Fangio were quickly past. Sommer notably was running at a faster pace than Fagioli's Alfa in fourth. However his hopes of maintaining a podium were dashed on lap 20 when his engine blew. It was a disappointing outcome to Talbot-Lago's first competitive race, however it proved Sommer had lost none of his ability in recent times.

At the front, the lead changed once again when Fangio retook the lead from Farina for the third time. The two Alfa Romeo drivers had been neck and neck throughout the race. The two cars had now lapped the entire field with the exception of Fagioli in third. The Ferrari's had come into the pits during the mid-race, neither Villoresi or Ascari were performing competitively. Neither of the cars were quick, Ascari needing several adjustments to his car during his stop, the new 275 was poorly handling. During the pit-stops, the Ferrari's had let past Rosier's Talbot-Lago who like Sommer before him was attempting to run the race without stopping. Villoresi however continued to drop in pace and soon enough Ascari had taken fifth place from him.

The second round of pit stops went untroubled, Fangio still exited ahead of Farina. Farina remained looming in the background, however Fangio had managed to maneuver himself a couple of seconds space. Fangio would then have a much easier ride when Farina began to suffer from falling fuel pressure. Farina was forced to come into the pits for a third stop, however there was little the team could do. Farina returned to the track in the hope of securing some points, however he had lost second place to Fagioli and even Rosier's Talbot-Lago was challenging.

Rosier's decision to go the race without stopping was paying off, the Ferrari's were failing to catch him and Farina was quickly falling back into his clutches due to his oil pressure problem. Rosier was quickly past with Farina being forced to settle for fourth place, the Alfa Romeo having a buffer of a full lap to Ascari in fifth. Fangio, meanwhile with the disappearance of Farina was able to take it easy to the finish. For the remainder of the race he focussed on conserving his car to the finish. Fangio took the flag to win his second grand prix of the season, Fagioli in second finished a full minute adrift. Rosier took a well-deserved third whilst Farina was content to finish the race in fourth, the points being enough to maintain his lead. Fifth place was not enough for Ascari, the lack of competitiveness in the new car meant that he had fallen out of the championship race.

Behind Ascari came Villoresi and Levegh, both two laps adrift of the leader. Claes, the home talent came home in an unflattering eighth position, three laps adrift. A further five laps down was Geoffrey Crossley in the Alta. Whilst Antonio Branca, once again way off the pace being six laps down had however managed to finish the race for the second race in succession.